overall, it was beautiful omg the opening got me flailing already. although because i watched the NHK documentary of the concert, i was aware of nino's back pain during the whole concert and i couldn't help but keep an eye on his expressions. i thought they'd certainly change the part to where they jump out to the stage from the second day (instead of just standing still while the lift was going up on the first day) but i guess they didn't because it rained (on the second day) ? poor neen, it must've hurt so much when he danced :( sigh. and for this exact reason, we love you ninomi !!! <3 <3 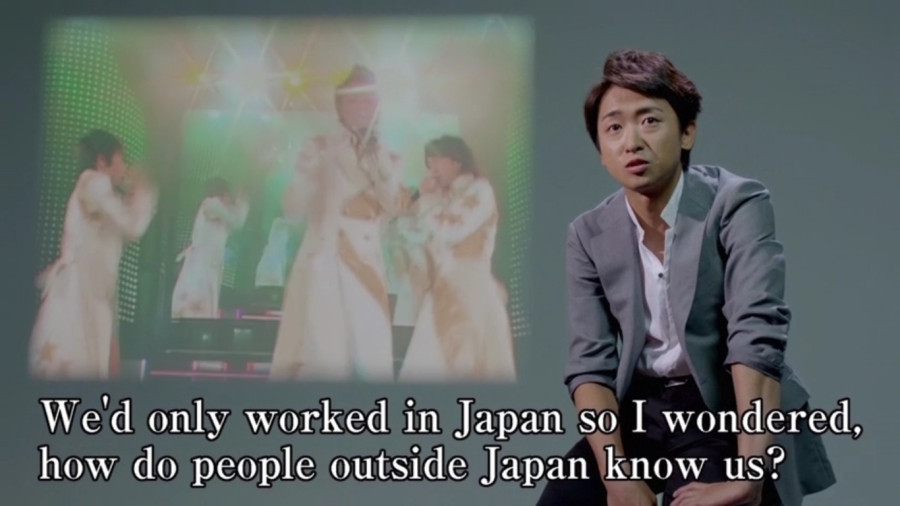 ohno-san, we have our ways when it comes to getting closer to you guys. :D

woah how long has it been since i posted hahaha.

i guess i couldn't just leave lj deserted forever. i guess i have to be a somewhat active member of comms >.<
although recently, it's been so hard to find subbed videos and all that, due to that heartless backstabbing inconsiderate fool/s who decided to mess up comm's rules again. jeez, i feel so sorry for them. don't they have any lives ?

putting that aside, is anyone even going to read this ? haha. i feel it's useless to post but i want to get rid of all the spiderwebs hanging down from my lj. daaamn. there's a lot. nearly 2 years worth !

getting out of topic, i think i'll end it here. sigh. i just wish people would stop doing what they aren't supposed to do. we all know subbing is illegal right ? especially of JE groups.

well then.
let's get straight on to it.
2 - Member with cute pose
Ninomiya Kazunari // Happiness PV

im sorry, i would've picked a cuter one but this was all i could find on my crap laptop (hence "craptop")  ; m ;

wow this is a very short entry LOL

so.
happy birthday kazu <3
you're so adorbs omg
i wanna squish your cheeks
and watch you perform magic irl
honestly,
you've got such an amazing voice
you're such a brilliant song writer
a flawless actor
a despicable brat
hope your dreams come true--that is--to become a director :)
now that you're 30 17,
you're free to do whatever it is you want
but then again you have the jimusho
dont waste your time bby! :D
stay in arashi,
keep fighting,
work hard,
and lastly thankyouu for all your trolls and bratty attitudes over the past years
yay ! <3 <3

but overall,
HAPPY BIRTHDAY YOU BRAT.
i love you :* 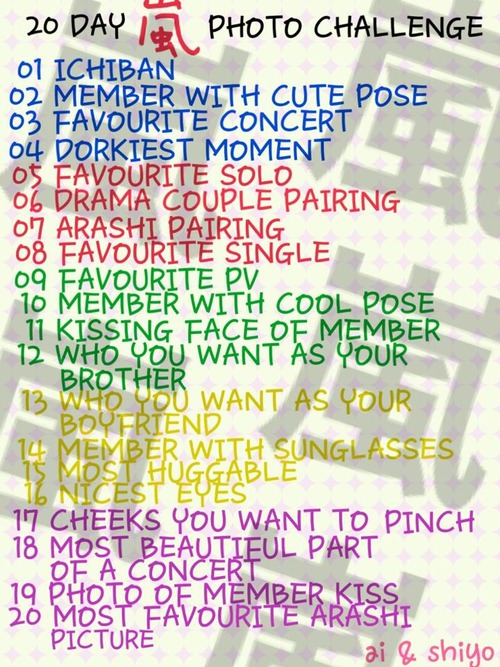 so some fellow admins on a facebook page i admin made this a few months ago, and i felt like doing this :D
Here goes!
1 - Ichiban
Sakurai Sho \\ 櫻井翔

(^ gif mine)
what can i say? even though i was J-baited, somehow i fell for this man boy. hehe c:
he's the coolest and oh-so-fab. do i need to say more?

POPCORN WAS AMAAZING. OK.
do i need to say more? :3

(gif unrelated but ok)
(gif not mine ok)

(note; there maybe some swearings underneath)

So hey.
been away for quite a while.
i really need to update my lj more often /sigh
oh well.
i'll just talk about my day.

Today was absolutely horrible.
There's just no words to describe how freaking frustrated i am right now.
So my parents' friends came over today with their kids (4 & 5 year old). All of us were just sitting there talking.

I realise that they're only 4-5 year olds, and that its normal for people their age to do stuff like this so if you're gonna leave a negative comment like "your friend's right, you're getting too worked up over 4-5 year olds", then gtfo.

Hey! :p I recently lost ALL my arashi files :'( and I wanted to recollect arashi tours :D
i was just wondering, does anyone have the links for BW concert ?
If you do I LOVE LOVE LOVE YOU SO MUCH. :3

Hey there! :)
So, finally bothered making my first post -__-"
i thought i should tell you a bit about me first, and btw I'm a newbie :D
*yoroshiku*

You can call me Eta and I'm from Indonesia. I dont really know what to post since my life is not that interesting, but I'll try (?)
I'm a HUGE fan of Arashi :3 and i'd have to say that my bias is Sho <3 I'm prooud to be an Arashian :))

I currently live in Australia for some time already, sadly there aren't that much people you can talk to about Arashi :L only a few knows, but sometimes we end up being in awkies silence etc (-___-;   ) and i feel that even if i do have someone to talk about Arashi to they wouldnt be as "obsessed" as me. So yes, sad life.

Mybirthday is coming up soon!! (10 August)
Yes, that's next week! My japanese friend (who OBVIOUSLY knows arashi) decided to give me an early present of a magazine with an Arashi cover~!!!!!! OMG *__*
She told me the night before that her mum had gone to a japanese bookstore (Kinokuniya) and saw the magazine. But her mum realised that in a plastic wrap there was 2 MAGAZINES!! she immediately bought it and so she bought 2 magazines for the price of 1 ;DD When she told me that she'll be giving the other one to me, I was literally jumping up and down, screaming, and got REALLY excited for the first time that i could remember in my whole life. Well, as you could probably tell from my reaction, i do NOT have any arashi stuff (merchandise etc) so yes, this was my first "merchandise".

I looked through it and it was amaazing~! It had Maruyama from Kanjani 8, Oizumi Yo from MatsuJ's drama 'Lucky Seven', it had Oguri Shun and his new summer drama, and Mukai Osamu and his new drama ;D I was really lucky. And my friend was so DAMN NICE!!! I owe her one.

Anyways, sorry for boring you to death. I'mnot good at entertaning people, trust me.
Collapse